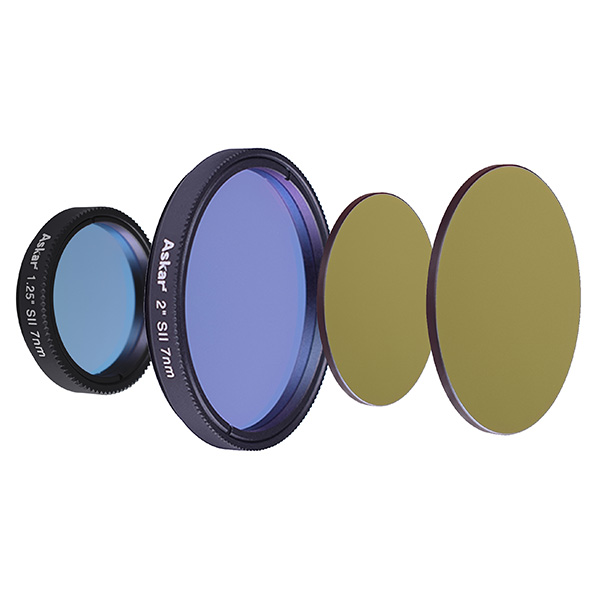 The Askar S II 7nm filter is suitable for imaging of S II emitting nebulae or some supernova remnants. The Askar H-alpha filter has an extreme high transmission at a center wavelength of 671.6nm. The 7nm narrow bandwidth enables this astroimaging filter to block all the light pollution and other unwanted artificial lights or night glow. So the Askar S II filter is an ideal instrument for astro-imaging in heavily light-pollution hit locations and delivers enhanced contrast at darker places.

The Askar H-alpha filter is designed for improving the contrast and details of some nebulae and supernova remnants. Though there is very little sulfur in nebulae, but the emission from the trace of S II in nebulae is rather strong. The deep-red light emitted from S II can bring out the quite delicate detail which is different from those regions that release H-alpha light. So it works well on those nebulae emitting S II. Featuring 7nm narrow bandwidth and a greatly high transmission at a center wavelength of 671.6nm, the Askar S II filter can bring out the most amount of details of the emission nebulae, planetary nebulae and supernova remnants. Also, the out-of-band blocking ability is rated with OD4 (0.01%) with the blocking range of 200-1050nm. It delivers an excellent signal-to-noise ratio and a sharp cut-off rate to attenuate the disturbance from other wavelengths.

The narrow bandwidth and an effective cut-off rate are important indices when choosing a narrowband filter. The Askar S II filter has a narrow bandwidth of 7nm and an extreme transmission of 90% at the peak, in the meanwhile, sufficiently suppressing other off-band wavelength. That’s why we sometimes call those 7nm-bandwidth, or even a smaller bandwidth of 3nm, a line filter. So the Askar S II filter can efficiently reject all the light pollution. You can expect a terrific performance of this S II filter in artificially-brighten background sky.

The production process is strictly controlled and every single Askar S II narrowband filter is individually examined and tested to ensure that they can highly satisfy the observing interests and needs of our customers.

· High transmission of 90% and excellent cut-off can greatly enhance the contrast and bring out the most detailed information for those deep-sky objects.

· Designed to sharply cut off the inference of artificial light from sodium vapor or mercury vapor street lights and other unwanted disturbance like sky glow.

· The Askar S II narrowband filter is not suitable for visual observation and not designed for imaging or observing the Sun or other non-S II-emitting objects. 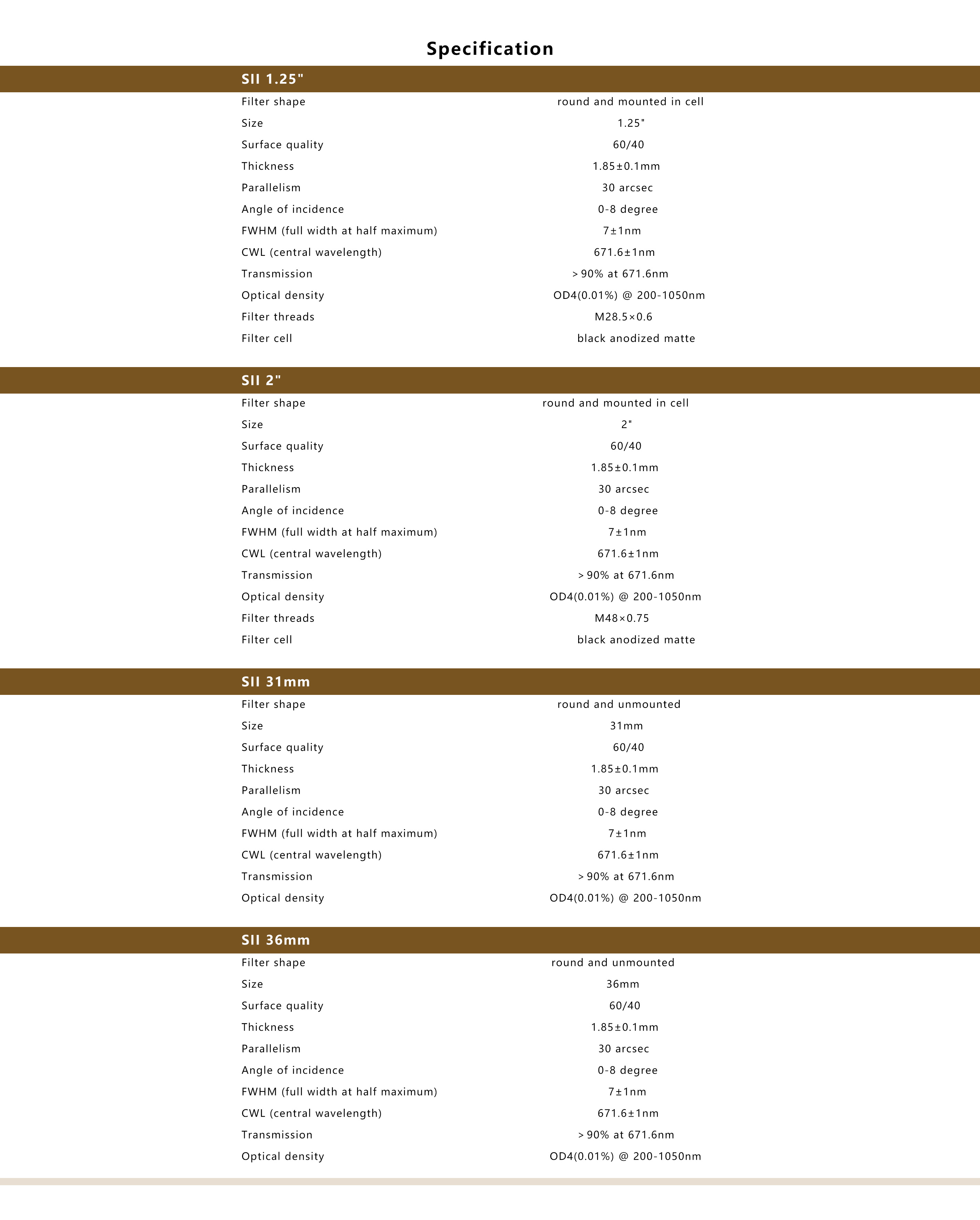 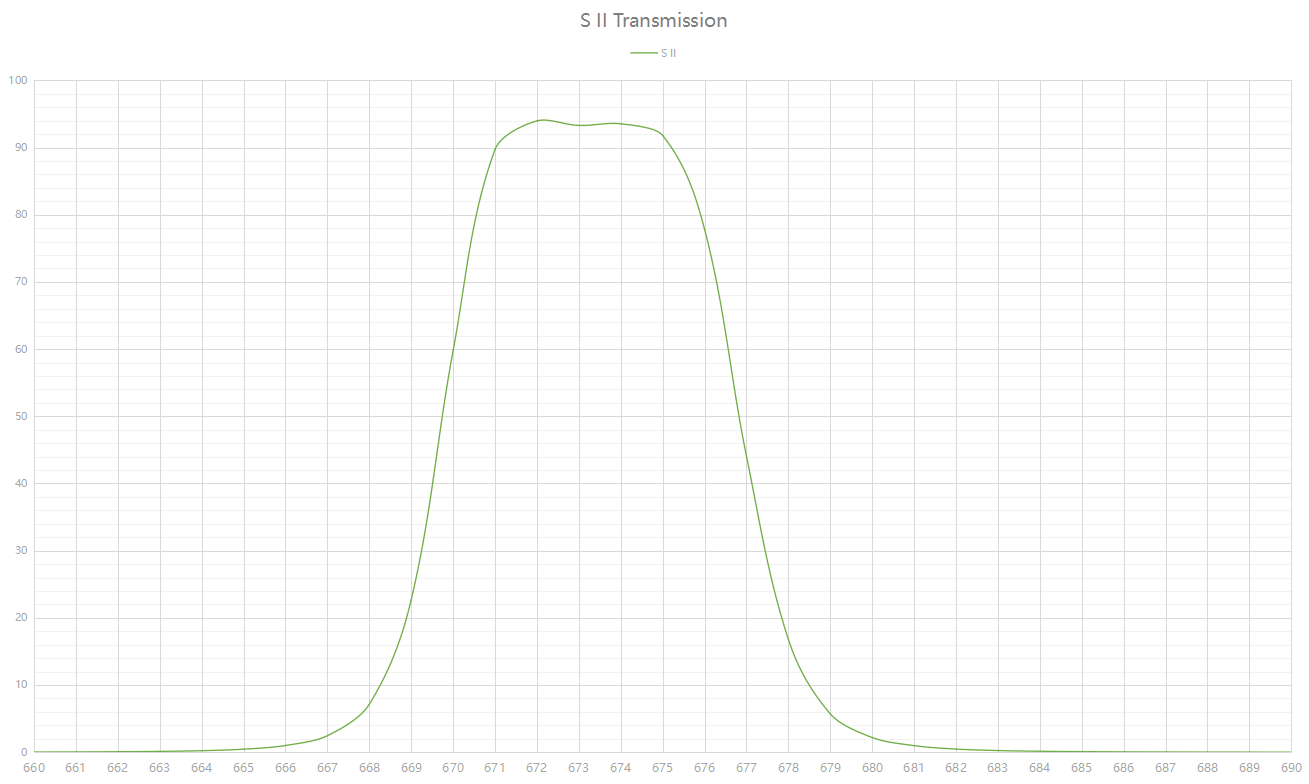